Some guys dump images of their LEGO builds

It’s got insane articulation, an almost 180-degree bend at the elbow and knee, ankle tilt, a neck joint, almost human shoulder articulation, fingers, wrist, ab crunch, ab twist (and it can do both at once too!)
Edit: Also, the frame is not actually my own, look up Biqnicle, they have a helluva good frame with instructions to build it (I still consider this a moc, however, as it’s like saying a statue shaped like a human was based one ones before it)

i just finished a six-legged 3-cannoned heavy land dreadnaught which can carry 4 lego crates and about 5 people.

Back with a mecha inspired upper torso, gotta figure out how I’m gonna get the lower torso to look nice though

I have returned like 4 months later with progress on a revamp of a specific character from Bionicle. Any guesses which one? (If not I can and will be extremely disappointed ngl)

W h y you do this though

Remember that? This is it now

hey…
I got that kit when I was a very little boy and …
I think I did piece it together, but my parents end up tossing all my Legos away when I’m 15.
Legos are cool. They are essentially 3D printing, except in blocks.

My dream kits are usually their flagship.
When I was building a … Audi convertible (black, I believe) I’m eye-balling the Lego 8421 on the back of the box.
I used to had a Lego City (the airport with a plane), but then I somehow knowed about the 42009 …niver
Then they had the 42055. the 42030, the 8275 … 8265?
I had a lot of 8000 series on my list but they are long gone …
Their latest 42081 had been slowly pouring out in China. But hey, I’m now a 18-year boy getting offers from universities.
But I did “made” a 42009 … albeit in simpleplanes.
That was some good stuff.
Nah, the missile pod had just the right amount of support.
@MasterChief
One of my friend had the largest star-wars … destroyer. He got a small scale death star too. He was a lego and Star Wars fan.
I still have no idea whether I would be touching another block of Lego or not …

The weird thing is that I don’t build lego anymore. I put them on shelves on trophies.
And that I only visit the forum now to post like one reply

dude losing ur legos like that sucks. ur parents shouldn’t have done that lol. i love all legos, and there are some pretty lit mech designs ive created. @Bioniclefan414 im thinking devouring paws as legs(four sets) a missile battery on top, and the body looks like this. 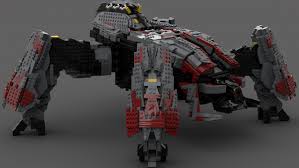 ur parents shouldn’t have done that lol

true. Somehow they are also the ones that used to take me to Lego “classes” to build stuff with others – and that’s where I got one of those small car kits.
I also used to have “chests” of lego, but they are … they are more often the “classical” ones with the studs on top (because the 2008s). Things had really changed a lot.

but while I have absolutely no use for that stupid (but really big) City kit they should at least kept my car carrier … and a stupid crane.

damn I can’t find those. Must be a 8000 series. Too old to be even remembered …
The closest I can find is the 60060, but mine had a loading ramp and a single long carriage …
Legos are expensive, because each brick can take on 100 kg of stuff (or 1000 kg? they are extremely tough).
But they are ABS, and ABS degrade in sunshine (degrades when exposed to ultraviolet). Store it somewhere shady.
If I were to pick up Lego again, I think one of their medium sized Technic would do the job very well… That 42053 is sexy. I might try building it without a manual when I got into university.

I don’t deal with the kits beside a few Technics I have no idea where your parts come from and I had never seen such parts. Looks more like Gundam, which is pretty cool if you ask me.

Arm one and both thighs complete, and I (of course) added more details to the torso

I think that a badass name.